GOOD TO KNOW ABOUT DIAMONDS, THE VERY ESSENCE OF THE ENGAGEMENT RINGS:

The natural diamond appears in many shades and colours: yellow, brown, blue, green, purple, black and the almost colourless. If the colour of the diamond is closer to colourless than it is more valuable, although the beautiful, colourful kinds such as blue or pink can be very valuable as well. The colour of the diamond is graded from D to Z, where D is the most valuable (colourless) and Z is the least valuable. 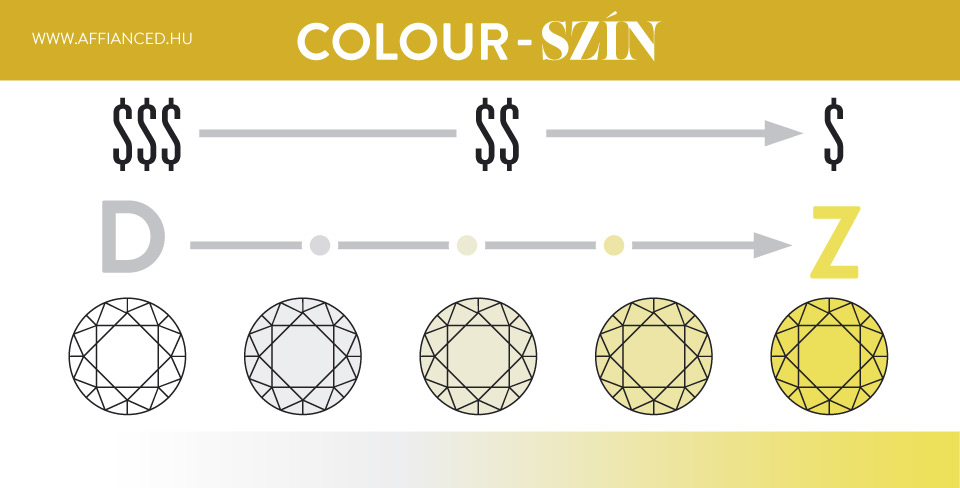 Every mineral that was created in nature like the diamond contains small inclusions which are microscopic blemishes. Although, a great part of these blemishes are invisible to the naked eye. To determine the clarity of the diamond, experts examine the gemstone under 10 by magnification and categorize them according to the following manner: 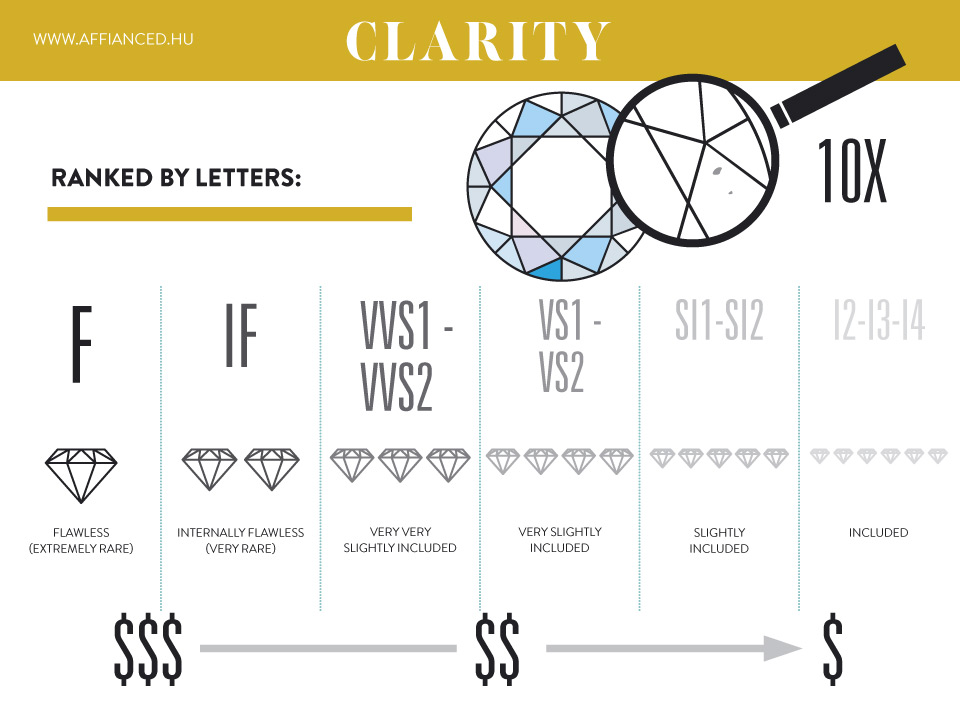 The most well-known determinative of diamonds is its size or rather its weight, which is calculated in carats. Carat is the weight measure used with gemstones, which is not to be mixed up with the carat of gold. In case of gold, carat, determines purity. With diamonds 1 carat is circa 0,2 grams (approximately like a paper clip)

In case of gemstones, that are less than one carat, are classified in points in this manner: 1ct is 100points (pt) avoiding the usage of decimals. Therefore, a 1 point diamond is 0,01ct. On the picture below, you can see how the different sized diamonds appear on an average female hand. 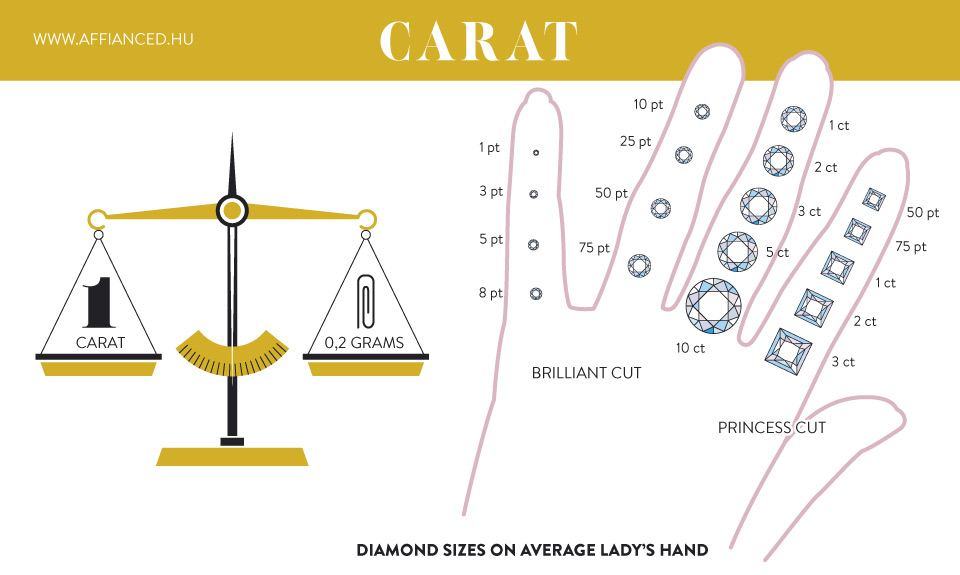 Diamond is the firmest known material on Earth, therefore it can only be fashioned with diamond dust abrasive. The most wide-spread diamond cut style (which is used for other gemstones as well) is the brilliant cut, where 57 facets are cut on the diamond. This cut has the best reflection and refraction attributes which give the most beautiful shine to the diamond. 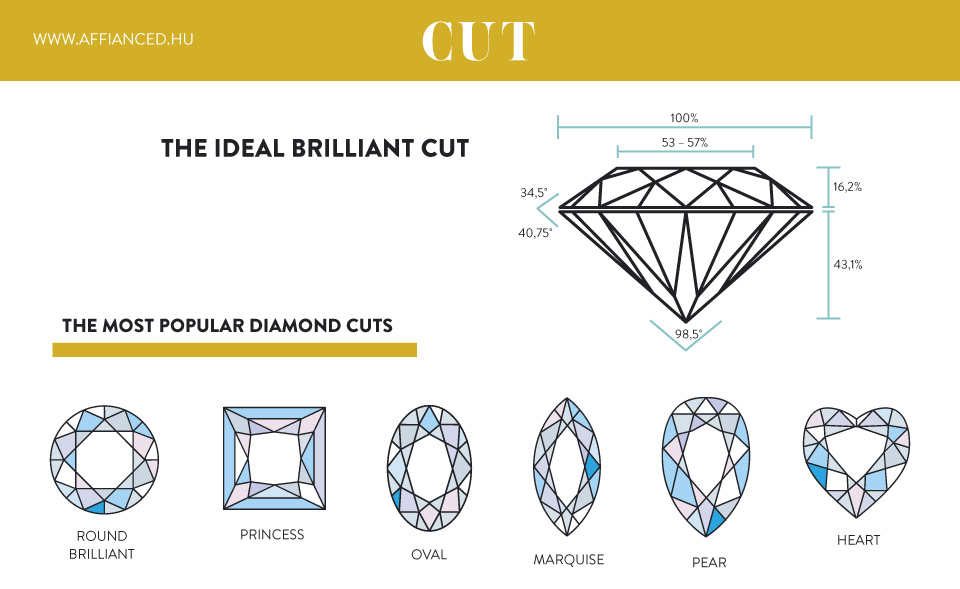 Among the numerous meanings and symbols that are connected to the diamonds, the most well-known symbol is the persistent, long-lasting love. The multiple colours and cuts make it possible that everybody with different style and clothing can find a diamond that suits the most. That is the reason why the diamond ring is the most popular choice.

The history of engagement rings, used for marking togetherness can be traced back to antique Egyptian civilization, but the first real proof for the usage of rings as the symbol of togetherness roots back to antique Rome. The first, infamous diamond engagement ring was gifted to Maria of Burgundy from the archduke of Austria, Maximilian. She, later became the archduke’s wife. This event was a precedent among European nobility, aristocracy, that ladies should be proposed to with a diamond ring.

The processing of diamonds at that period was a great technical challenge, that is why only the aristocracy could afford the noblest gemstone, the diamond. In the sentimental Victorian era, diamonds were used with other gemstones. The richly fashioned engagement rings’ most typical ornaments were the flower motifs. The usage of these motifs continued in the Edwardian era, but the world of richly ornamented rings changed and the filigrane technique took its place. So diamond rings- by today’s standards- became more elegant.

At that time, for everyday people, diamond jewels were unreachable and unaffordable, up until the 1870’s when the DeBeers company discovered an enormous diamond mine in South-Africa and started to mine the most glittering gemstone, the diamond. Diamond rings became wide-ragingly popular in the 1930’s thanks to the well-built up marketing campaign by DeBeers, in which the most well-known movie stars advertised the diamond. Its most famous slogan is still used and liked: “A diamond is forever” According to a survey conducted in 1965, more than 80% of brides get a diamond ring in the U.S. In 1992, 1500$ were paid for a diamond ring on the average, nowadays this price ascended to 5000$ for a diamond engagement ring. 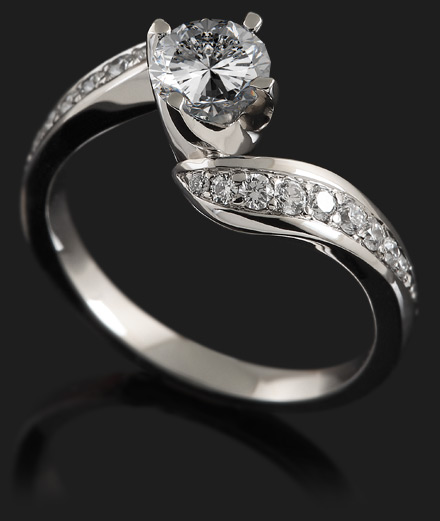